One month into the new session, legislative leaders are focused less on pursuing the lofty goals they laid out in opening day speeches, and more on where to assign members more than eight weeks after their elections.

State revenue collections missed the mark by nearly 5 percent in January, with the $3.834 billion that the Department of Revenue reeled in landing $192 million or 4.8 percent shy of the previous January's collections and $185 million or 4.6 percent below the monthly benchmark.

The day before he resigned as chair of the Department of Public Utilities last week, Matthew Nelson responded to nearly 100 state lawmakers who had written him with concerns about winter energy bill increases to tell them that the gas bill reductions publicized by the Healey administration Thursday were coming -- and to explain that the same can't be done for electricity bills.

New England grid operators expect demand for and use of electricity to hit their highest points yet this winter on as bone-chilling cold takes over Friday and Saturday, but they also expect they will have more than enough power available to meet that demand.

The House and Senate seem to once again be on different tracks when it comes to legislative transparency, potentially teeing up the branches for a do-over of their 2021 negotiations on internal operating procedures, which ended in an impasse.

Who’s On The Move?

... The interim president of St. Elizabeth's Medical Center is moving up the ladder at Steward Health Care, and the Brighton hospital's new president is arriving from Tenet Health Care ... The new MassGOP party chair made a quick move to pick an executive director as she sets out to build up Republican power and influence ... The House Ways and Means Committee has a new budget director ... Energy and Environmental Affairs Secretary Rebecca Tepper picked her communications director ... Boston Public Schools named its transportation director the first-ever chief of capital planning, and promoted from within as part of the shuffle ... A Boston-area nonprofit community development financing organization hired a Brooklyn native as chief operating officer ...

[Coverage Developing] The MBTA is convening an independent team to get to the bottom of the delays in construction and delivery of more than 300 new Red and Orange Line cars to the MBTA, Gov. Healey told reporters Thursday after taking a ride on the Red Line.

There were no hiccups or problems in the first 48 hours of in-person sports wagering in Massachusetts and the newly legal activity was humming along according to plan, the executive director of the Gaming Commission said Thursday.

State education officials use criteria that allows exclusionary admissions practices at vocational technical schools, leaving behind students of color, English language learners and students with disabilities, according to a new lawsuit filed by a coalition of educational advocacy groups.

A day after the House settled its internal rules for the upcoming term, the Senate on Thursday teed up its own proposed rules packages for debate next week. Amendments to the proposed Senate Rules (S 17) and the Senate's version of the Joint Rules (S 18) are due by 5 p.m. Monday, with both documents up for debate and revision next Thursday, Feb. 9. - Sam Doran

A day after the House declared a winner in a contested election and approved its legislative rules packages (H 2023 / H 2025) for the session, representatives met for three minutes Thursday before adjourning until Monday. The only order of business was naming a committee that will escort Rep.-elect Kristin Kassner to her not-yet-scheduled inauguration.

Fiandaca Forecasts MBTA Improvements “From The Top Down”

[Coverage Developing] Introducing herself at the start of her first MassDOT Board of Directors meeting, Transportation Secretary Gina Fiandaca promised Thursday morning that the Healey administration will improve the beleaguered MBTA "from the top down."

When they get their bills in March, most gas customers in Massachusetts are going see a decrease of 4 or 5 percent after the Department of Public Utilities this week approved a mid-season reduction in gas supply charges as natural gas prices drop.

The longtime head of the state's largest human services trade group plans to step down this year.

Quintupling the estate tax threshold, slashing the capital gains tax rate, and expanding use of a single sales factor apportionment lead the tax reform ideas embraced Wednesday by one of the region's leading business groups and an organization representing public accountants.

The House on Wednesday unanimously adopted its rules for the two-year term that began four weeks ago, agreeing to eliminate a pandemic-era policy that allowed representatives to participate in sessions and vote remotely. The rules package also outlines a new hybrid committee hearing structure that will allow for both in-person and remote participation from most legislators and the public.

During its first two and a half hours of formal business for the year, the House adopted its internal rules for the 2023-2024 session, agreed on a proposal for joint House-Senate rules to send over to the other branch, and voted to settle last year's disputed Second Essex District race in favor of Democrat Kristin Kassner. Rep.-elect Kassner, a Hamilton Democrat, will join the House as its 160th member. Now-former Rep. Lenny Mirra, a Georgetown Republican, was at his desk for the beginning of Wednesday's session before walking out of the chamber as the roll calls ending his continued service started to roll in. Representatives speaking in favor of the rules packages emphasized that the new guidelines will bring members back into the State House for formal sessions, marking a return to a pre-2020 norm, while a pandemic-era innovation -- hybrid committee hearings -- would become permanent. - Sam Doran

When she moved to Massachusetts from Brazil, Claudia knew that she would encounter challenges because she did not speak English, but she thought the Bay State's Brazilian population meant that Portuguese would be a widespread language here.

Last Tuesday, a Mega Millions ticket sold in Massachusetts won its holder $31 million, the largest lottery prize won in the Bay State since August 2017 -- and then it happened again this Tuesday. 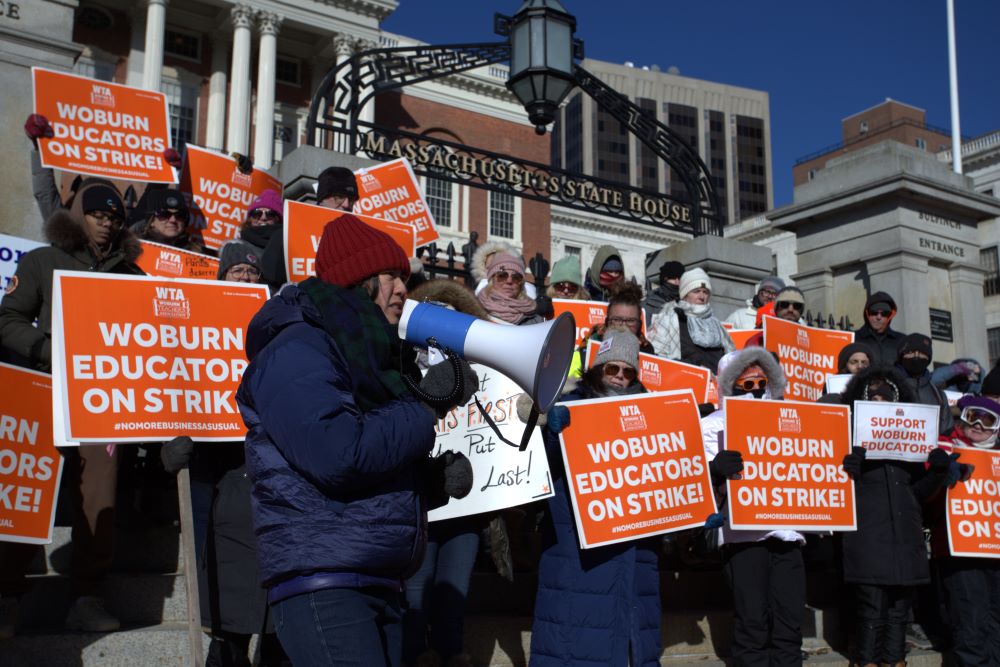 Gov. Maura Healey declined to meet with members of the Woburn Teachers Association after they showed up outside her office on the fifth day of their strike Friday afternoon. 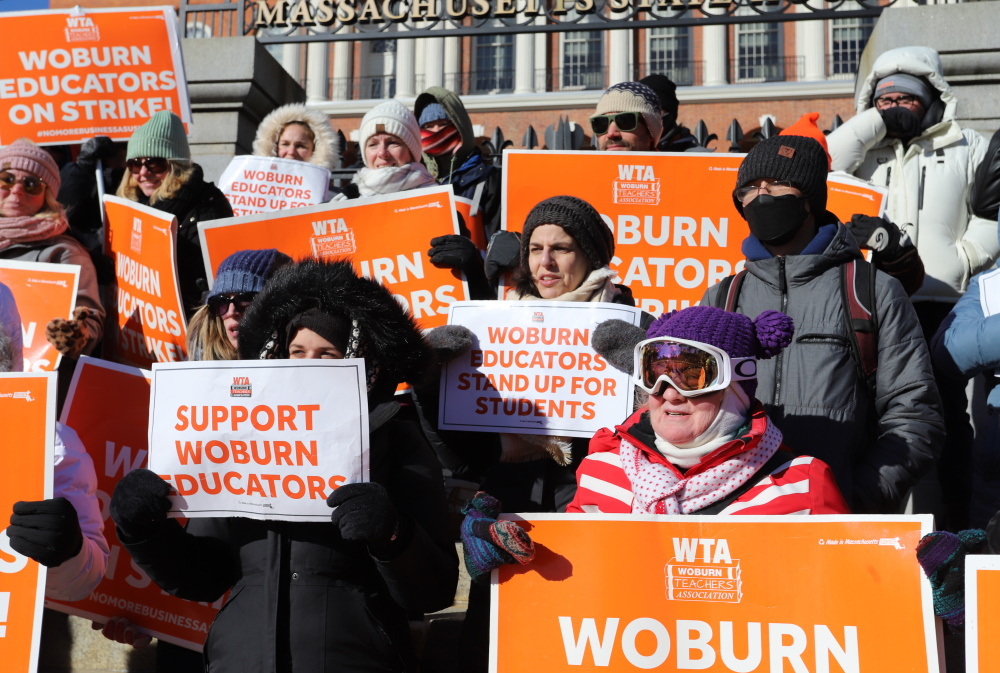 Weekly Roundup - Win Some, Lose Some

Sometimes it just feels like Groundhog Day, though there's always a chance the ending could be different. 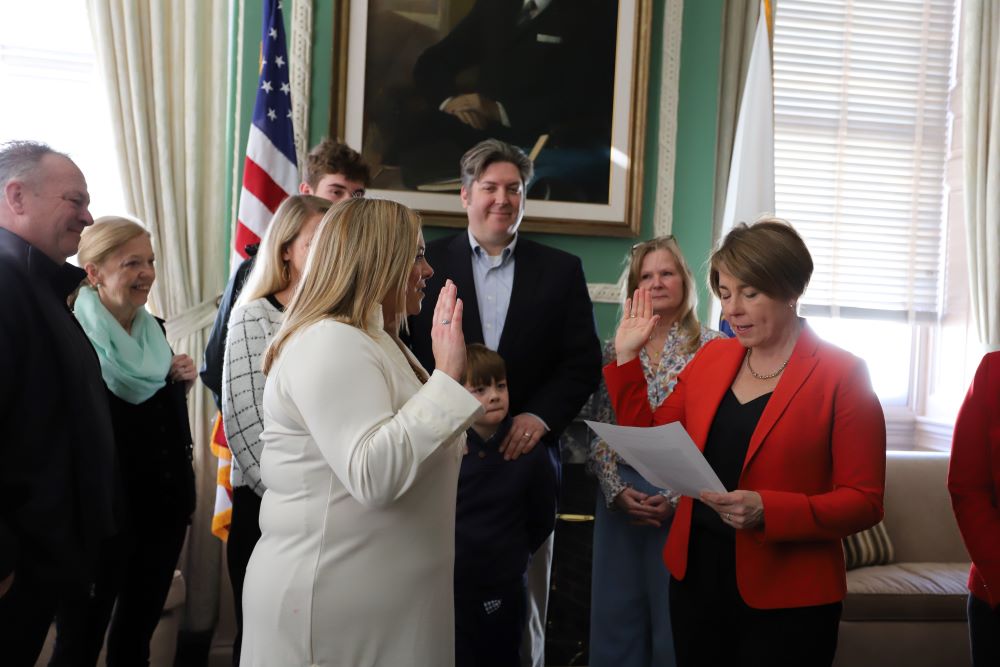 Surrounded by friends and family, Rep. Kristin Kassner of Hamilton was sworn in Friday after eight weeks of nail-biting back and forth over the election results in her House race. 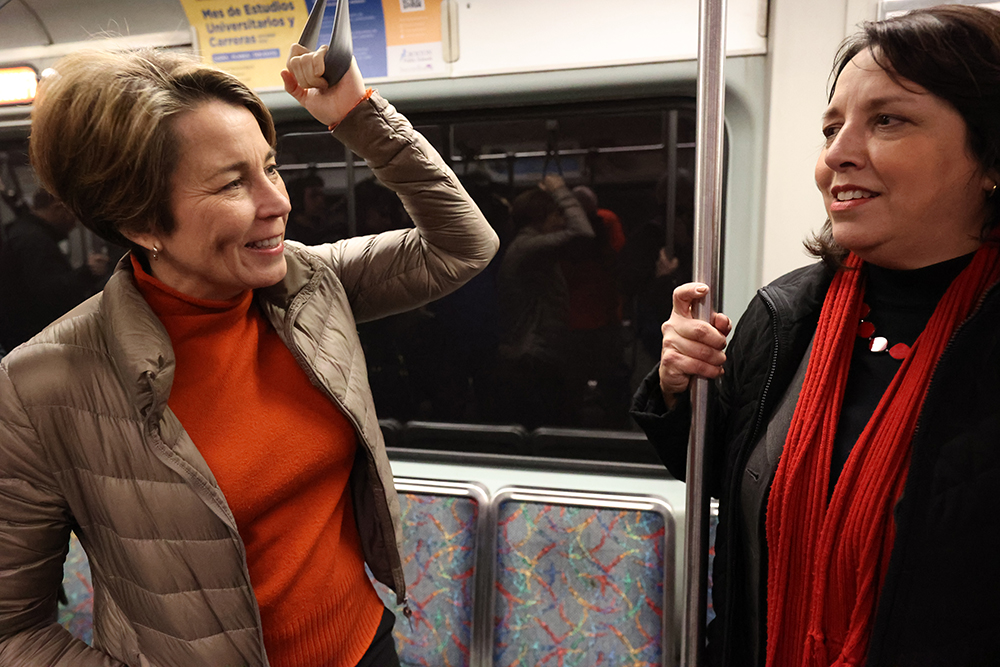 With service cuts and slow zones still stymying travel on the MBTA, Gov. Maura Healey pledged Thursday that she would "not sugarcoat" the outlook at the agency and pitched her administration as sympathetic to the widespread frustrations felt by riders. 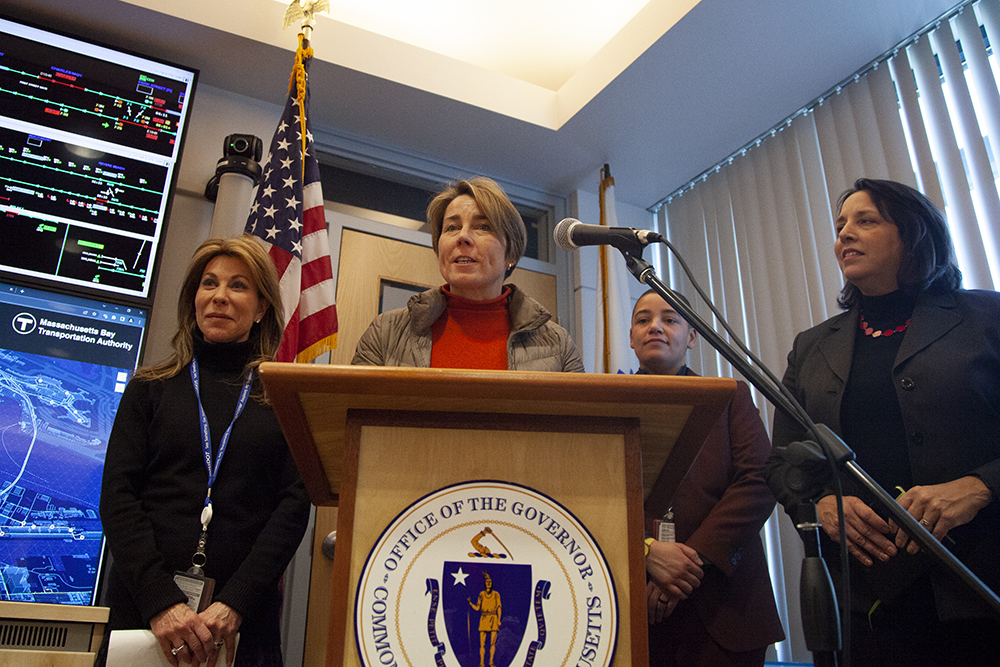 The MBTA is convening an independent team to get to the bottom of the delays in construction and delivery of more than 300 new Red and Orange Line cars, Gov. Healey announced to reporters Thursday afternoon after taking a ride on the Red Line and touring the T's operations center.

The share of Massachusetts students who take out loans to pay for public higher education has exploded in the past two decades while the combined pressure of inflation and a lack of investment have hamstrung the impact of state-funded financial aid, according to a new report.

Search committee members agreed Wednesday to advance a pair of out-of-state finalists for the top job at UMass Amherst.

Benefit Recipients Mindful of Asset Limits as Emergency Winds Down

As policymakers move past the COVID-19 pandemic, Bay Staters receiving benefits such as MassHealth coverage need to be wary of the chance that savings they accumulated during the emergency might put them over the eligibility threshold, an expert said Wednesday.

House Speaker Ronald Mariano remained non-committal Wednesday when asked about the prospects for tax relief this session, saying that things have changed since he and Senate President Karen Spilka agreed in July to a $1 billion package of permanent tax code changes and immediate relief measures.

Massachusetts Republicans nearly stuck with party chairman Jim Lyons for another two-year term, despite disastrous election results over his four-year tenure, but instead narrowly decided Tuesday night to give Amy Carnevale a shot at running the shrinking party.

Who the News Service is Following

About the News Service